All in One Offer! | Access Unlimited Courses in any category starting at just $29. Signup today. Offer Ends in: 5 Days! 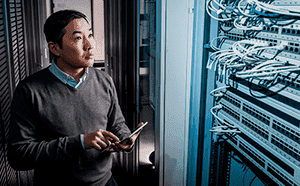 This course is designed for speed learning Server 2016. The course is broken down into bite-size manageable chunks with most of the video tutorials being less than 5 minutes long and any tutorial over 5 minutes comes with a lab file to easily follow along with.

Open your virtual machine, follow along using a short very concise video tutorial, move on to the next video, repeat.

Anyone signing up for this Microsoft Server 2016 course can contact the instructor for two free coupons for both parts I and II of the my Server 2012 courses.

This is Part I of a two-part series for learning Windows Server 2016 using hands on training. Part I is for those needing to become familiar with Server 2016, building and maintaining a Microsoft Server 2016 network from the ground up. In this first part, students will learn how to install and configure Windows Server 2016 just as they would as a network administrator or networking consultant.

Part one of the course trains the student on how to install, configure and manage the most common roles and services found on a Microsoft 2016 network. Part 2 of the course, will introduces the more advanced roles and features offered in Server 2016.

Do you want to learn how to install and configure Microsoft Windows Server 2016?

Do you prefer learning using hands-on as opposed to just a lecture and quiz?

If you have answered YES to above questions, then you are at the right place.

This course teaches you the administration skills for Installing and Configuring a Microsoft Windows Server 2016 domain.

This course provides hands-on learning on how to install, maintain and configure Microsoft Windows Server 2016.  The course is structured using short tutorial videos and hands-on labs. Students open up their VM of Server 2016, watch a short video tutorial, if needed, review the hands-on lab, complete the lab and move to the next tutorial.

Why should you take this course?

This is the course that could change your life.

And remember, once you purchase the course you will have lifetime access to the course and you have a 30 day money back guarantee if for any reason you do not like the course.

Prof. K comes to Learnfly with a Master of Science in Cyber Security from UMUC (2015) and Master of Science in Information Technology from Capella University (2007). Prof. k has worked in technology since 1998 working as a Microsoft Support Technician, a Microsoft Certified Trainer, Technology support specialist, a Senior Network Technology Consultant, an IT Auditor and most recently as the owner and operator of his own technology firm, CLK Technology Solutions located in Tucson Arizona. Professor K's expertise in technology focuses on designing, building, supporting network infrastructures and network security. Professor K has taught online since 2008 and teaches for a number of other online universities and colleges. Prof. k holds a number of valid technology certifications including: â€¢ MCTS: Windows Server 2008 Active Directory, Configuration â€¢ MCTS: Windows Server 2008 Applications Infrastructure, Configuration â€¢ MCTS: Windows Server 2008 Network Infrastructure, Configuration â€¢ A+, Net+, Security+ Professor K spends his spare time working in his wood shop and providing free technical support to the local retirement community in Tucson Arizona.
View More...